Balance Yoga Poses, Poses, Yoga
by Steve
Difficulty8
Hip Stretch9
Abdominal Stretch8.5
Shoulder Stretch9
Blood Flow7.5
Anxiety Relief6
Perseverance will pay off for Dancers Pose as it feels so good to be up here. Smile as you practice, even if you fall – falling can be fun, think of it like a child playing – and smile again when you are able to pause and appreciate your graceful dancer in whatever form it takes .
8

When I was a teenager I had six knee operations, after which it was suggested to me never to ride a bicycle, climb Snowdon, take aerobic classes, run very far or climb a mountain. Basically anything which involved impact to the knees, which is quite a lot of things! A few years ago I was determined to make it to the top of Snowdon with a group of friends and the picture in this post proves I not only did that (and no I didn’t get the train!) but I had the energy for dancers pose at the top!  As an aside I also did the climb (which for many is not a huge challenge but for me it was) the following year and it very nearly got the better of me! I love this picture as it to me summarises the posture. Dancers Pose is a pose of strength, determination, balance and joy.

Dancers Pose is a graceful pose which when you get it, feels both grounded and freeing. At first it can be very difficult to find the balance and then lift into it like a bird, opening its chest, so the key is to move slowly, with focus and care and breathe in and out all the way through, in and around! It is tempting often to hold the breath when you are really concentrating but you must keep it comfortable and flowing or you will run out of breath and fall.

So you become the dancer of your life. Reaching out to receive all the unconditional gifts the universe sends yet staying grounded and strong.

Stand in balance on two feet. Ideally be barefoot so you can really feel through the sole of the soon to be balancing foot. Take one foot behind you, placing the toes on the floor and relax the shoulders.

Lift the back leg and bend the knee. Try not to allow the leg to drift out to the side so the thighs stay close. 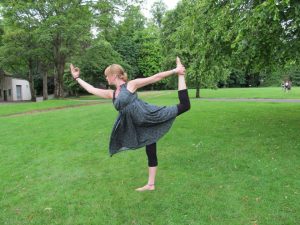 Reach the same arm as the leg just lifted behind and see if you can hold the ankle or foot. If not, just reach back for it.

Extend the other arm infront of you and tilt the body forwards, drawing the heart space forwards too like a peacock puffing out its chest and demonstrating its grace and elegance!

Keep the eyeline ahead or slightly down. Try not to crease the back of the neck yet keep fully extended, without tightening the shoulders.

Issues with balance and support issues on standing leg (can use chair or other prop).

Your Aura: Strengths and Boundaries