Garuda is the mythic king of the birds, the vehicle of Hindu god Vishnu throughout the celestial realms. He appears in both Hindu and Buddhist mythology. He is depicted as a divine bird with the head, wings, talons and beak of an eagle and the torso and limbs of a man. The word “garuda” means “eagle” in Sanskrit, but it can also be translated as “devourer” in reference to his role as the enemy of all snakes which are symbolic of death and the underworld. In contrast, Garuda represents birth and heaven and is associated with the sun and fire. He is said to be strong and fearless especially against demons so is considered to have protective qualities. 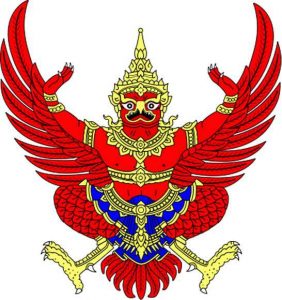 Garudasana is a balancing posture

I love Eagle pose as it’s just such a good stretch in those hard to reach tight areas between the shoulder blades, a pose that really helps you to let go of your day and the tension that can accumulate in the upper back from sitting at a computer, driving or carrying the weight of the world on our shoulders for prolonged periods. It’s also great for strengthening the muscles of the legs and developing balance which helps us to establish equilibrium between the upper half and lower half of the body as well as coordinating the left and right side of the body. Don’t be put off by its yoga “pretzel pose” like appearance it’s actually much easier than it looks and the huge plethora of benefits make it hugely worthwhile. Bear in mind that with the knees bent and the limbs being drawn into the body your centre of gravity is low making this easier than some standing one leg balance poses so banish those “demons of the mind” that say you can’t do it, let Garuda give you wings and the freedom to create focus, strength and openness in the body and in the mind.

The steps to develop this classical posture are outlined below. There are modifications and variations offered so that you can experiment and find where you get the benefits and juiciness of the pose. Once you are able to master the initial pose, you can go ahead and try out its progressions.

Remember also to keep bringing your attention back to the breath throughout your practice, I cannot emphasise enough how breath focus will transform your practice and you! Never ever sacrifice your breath for the posture, wrap the posture around your breath. Gaudasana offers the opportunity to create openness in the back of the lungs facilitating breathing so enjoy the possibility of deepening your breath and drinking up this incredible elixir of life flushing the body with oxygen and life force. As with all postures, the more you are able to focus on your breath the easier the posture will be, the quieter the mind as you keep returning to this place of presence. This is where the magic and deliciousness of yoga is to be found! Garudasana is just an absolutely fabulous posture physically, mentally and spiritually so take flight and see the world from the perspective of an eagle. Enjoy the flight and discoveries!

Some people prefer to start in Utkatasana (chair pose), so that they're sitting deeply in the pose from the start.

This is up to you. You can try both and see which feels best for you and your body.

Shift your weight onto the left foot and balance on your left leg with the knees slightly bent.

Raise your right leg and cross it over your left leg as high up the thigh as you can. Wrap the right leg around the left.

Draw the top of the foot into your leg for stability.

If this is a challenge for you bend the supporting leg a little more.

If possible keep the top knee facing forward rather than turning outward.

Hug the legs together and sit back as in utkatasna (chair pose).

Cross your left elbow over your right and cross the wrist and forearm to bring the palms close together.

Lift your elbows and extend from your elbows through your fingers. This is said to resemble the beak of the eagle.

Aim to lift the elbows to the height of your shoulders while keeping the shoulder blades sliding down away from your ears towards the hips.

To deepen the shoulder stretch gently ease the forearms forward.

The dristi (gaze point) is forward. Gaze at a fixed point in front of the body.

Hug your legs together, and sit back as in chair pose.  Send the sit bones back.

Lift your elbows to shoulder height

Draw the heads of your arm bones back toward your shoulder sockets.

Ease your hands forward away from the body to create more stretch between your upper shoulder blades.

Relax your face and jaw.

Hold for 5-10 breaths feeling the stretch between the shoulder blades with each inhalation.

To come out of the pose, slowly straighten the legs and arms and return to Tadasana.

Ground the feet and repeat to the left side.

To progress the posture

9 Amazing Things You Should Do To ...