Home›Spiritual Practice›Breath to enlightenment- The nadis, Nadi Shodana and the awakening of higher consciousness

Breath to enlightenment- The nadis, Nadi Shodana and the awakening of higher consciousness

The nadis, in traditional Indian medicine and spiritual science, are channels which are said to carry the energies of the physical body, the subtle body and the causal body. The word nadi comes from the Sanskrit root “Nad” meaning sound, resonance, vibration. Nadi is translated as flow or motion. Nadis represent subtle channels of cosmic, vital, seminal or other energy. They are channels for the flow of consciousness. Their function is to distribute prana shakti the universal life force, and manas shakti, mental force, throughout the body. They make up the vast network of energy channels that makes each individual an integrated, conscious, and vital whole.

In the physical body nadis maintain rhythm and activity of the physical organs of the body. In the subtle (the body composed of mind, intelligence and ego, which controls the gross physical body) and the causal body (the body made of thought or ideas, rather than physical matter similar to the concept of the an individual soul), the nadis are channels for so called cosmic, vital, seminal, mental, intellectual energies (collectively described as prana) and are important for sensations, consciousness and spiritual development.

The concept of nadis is similar to the concept of meridians in Chinese theories on acupuncture. They cover the whole body with the stimuli flowing from one point to another like electric current flows.

The Charaka Samhita refers to a system of nadis, or channels which “penetrate the body from the soles of the feet to the crown of the head” and contain prana, the breath of life. It is said that there are over 72,000 nadis in the energy body which are said to branch throughout the body, each branching off into another 72,000. When this system is flowing freely, we are vital and healthy. If the nadis are congested and the system is not flowing freely, we may have low energy and experience low mental and physical health. 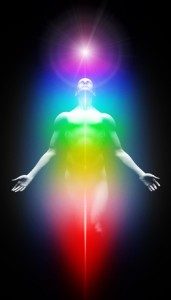 For those of us who practice yoga, the challenge is to harness this energy so it can fuel our physical, mental, and spiritual development. Yoga practice helps to strengthen the flow of prana in our bodies, helps to remove blockages. It strengthens the system and invigorates us with vital energy which assists us in being healthier physically, mentally and spiritually.

The Prasna Upanishads states in verse 6

The nadis are said to emanate from two regions in the body. The Kandashanta, an egg shaped bulb located a little below the navel, the subtle solar plexus in the subtle body is the centre from which the majority of these invisible energy currents flow out to the whole subtle circuitry of the subtle body. Their role is to transmit the subtle part of the digested food, the vital energy in the breath, water and blood to the main organs of the body and to eliminate toxins from the body. The other centre is located in the heart, as the seat of consciousness. Approximately 100 nadis originate from here and their main function is thought to be to unite the mind and heart.

Of the major nadis in the body the most important of these are the Ida, Pingala and sushumna nadis.  .

The main central nadi through which essential prana is channeled, is called Sushumna nadi. Sushumna represents balance and Ida and Pingala the moon and sun aspects of nature.  It flows through the centre of the spinal cord and is associated with the central nervous system, the central highway to the brain. Weaving around the central channel run two snake like channels which originate from their source at muladhara/root chakra. The Ida and Pingala nadis spiral around the sushumna nadi like the double helix of our DNA, crossing each cross at the junction of each chakra like the 2 snakes of the caduceus, and meet at the anja chakra (command) chakra, midway between the eyebrows. 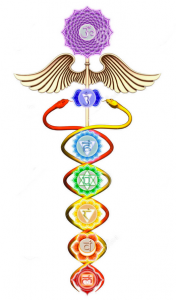 Ida nadi (comfort); the moon channel originates from the left side of muladahara chakra at the perineum and terminates at the left nostril; it begins and ends on the left side of sushumna. Ida controls all of the mental processes. It is a cooling, passive, nurturing, feminine energy. It is the mental force associated with mental activity, creativity, introspection and consciousness. It is the lunar/moon (tha) force. Its vibration is associated with the colour blue. It is associated with the right side of the brain and the left nostril. It represents the parasympathetic nervous system and relates to venous blood in the circulatory system. It is dominant when the breath is flowing through the left nostril.

Pingala nadi (tawny/brown, golden, solar); the sun channel originates from the right side of muladahara chakra at the perineum and terminates at the right nostril. Pingala controls all of the vital or life processes. It is a dynamic, extroverted, masculine and active energy. It is warming and stimulating. Pingala is associated with physical activity, solar (ha) energy, the colour red, the left side of the brain and the right nostril. It represents the sympathetic nervous system and relates to the flow of arterial blood in the circulatory system. It is dominant when the breath is flowing through the right nostril.

The interaction between Ida and Pingala corresponds to the internal dance between intuition and rationality, consciousness and vital life energy, and the right and left brain hemispheres. Usually Ida and Pingala nadis function alternately rather than simultaneously. In everyday life, one of these nadis is dominant at any one time.  Although this dominance alternates throughout the day, one nadi tends to be dominant more often and for longer periods than the other throughout the course of the day and indeed our life. This results in personality, behavior, and health tendencies.

Ida predominant people tend to possess nurturing qualities but may lack the energy to sustain energy, a demanding life or a strong yoga practice. They are full of potential; they are introspective, creative, and full of ideas. The gift of yoga to such individuals is to develop their Pingala side which helps them to manifest that potential in the world. Building on their Pingala helps them to energise and bring their ideas into reality and help them maintain their quest for spiritual growth.

Pingala-like people possess more type A personality traits. They can be very strong, dominant; go getting types with lots of energy. The gift of yoga to them is to be able to develop their Ida side, to cultivate the gift of introspection, and receptivity which is necessary to function most effectively in the world and to be able to receive the grace of spiritual awakening.

Sushumna nadi; Sushumna runs along the axis of the spinal column and Ida and Pingala are represented as twining around it on opposite sides, crossing at energy centers, chakras, up the length of the spine. Sushumna becomes active when Ida and Pingala are balanced, with Ida flowing up the left side and Pingala to the right side. This is the primary aim of Hatha yoga. In fact the name Hatha refers to establishing this balance. Ha meaning sun and Tha meaning moon, in order to attain oneness and the dissolution of duality we seek to establish equilibrium.  Balancing sun and moon, or Pingala and Ida, facilitates the awakening and arising of kundalini energy, and subsequently the awakening of higher consciousness. In fact, some yoga teachings hold that as long as either Ida or Pingala predominates, sushumna stays closed and the power of kundalini lies dormant. When Sushumna is active, under the correct conditions of balance and flow, kundalini is able to rise from its origin in the base of the spine (muladhara/root chakra) up to the crown of the head (sahasrara/thousandfold chakra), passing through each of the other chakras in its course. This is the path to enlightenment and is what is referred to when we talk about “raising” consciousness.

If Pingala and Ida, life and consciousness function simultaneously, both hemispheres of the brain are balanced and work together in harmony to enable simultaneous thinking, living, intuitive, conscious ways of being. This can only happen when Sushumna, the central canal is flowing. When all 3 are active the mind is able to receive all three currents of energy and we are quite literally, enlightened and completely switched on. Once sushumna is activated a means of communication between the higher and lower dimensions of consciousness is established and kundalini energy awakens. This has been measured electro physically by Dr Hiroshi Motoyama which records the waves and currents of energy that ancient yogis spoke of 1000s of years ago

Nadi Shodhana (nadi cleansing in Sanskrit), alternate-nostril breathing is the most powerful method of balancing Ida and Pingala nadis. This practice is effective because the Ida nadi is directly connected to the left nostril, and the Pingala nadi to the right. A few rounds of this basic Pranayama technique at the end of an asana practice are an excellent way to help restore equilibrium between the two nadis and to compensate for any imbalances in the body/mind 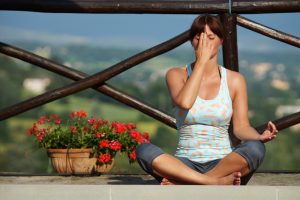 How to practice Nadi Shodana

That's one complete round of Nadi Shodhana

Begin with 5-10 rounds and add more as you feel ready. Remember to keep your breathing slow, easy and full.